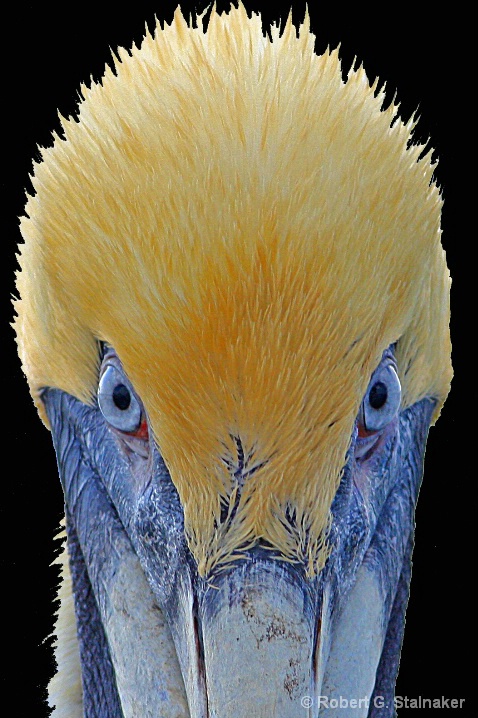 He looks wonderful! I hope he comes back and buys some shots for the family. #5683753

what a great shooting day for you!! this shot is amazing and your presentation is perfect. #5684233

Thanks all of you for stopping by and visiting and for your comments. This was one of those totally weird things you sometimes see dealing with wild animals. There was some good activity going on with terns and gulls, but my eye caught this brown pelican way out and it ended up coming to where I was and close. It stayed a short time and just left, headed right back from where it came from. Normally, pelicans stick around and rest and will stay real close to people. This one came a long way, stayed briefly, then left, almost like it came just to have some photos taken. Very strange. #5685835

Robert - Awesome shot. I am familiar with the road to the Kennedy Space Center - Pelicans love to hang out along the Roadside. Way to grasp the moment. #5712965

Thank you all for visiting and for your comments. I have a 23 inch monitor and I can make out my reflection in the pupil of the subject, showing my baseball cap and the lens to my camera. I wish you all could have been there with me watching this guy take this long journey in, the photo shoot, then the long journey back. As David said, these guys normally like to just hang out when they arrive. Weird events like this is what makes photography so enjoyable. #5721957

This is a brillant crop, with a crisp, colorful, explosion of dramatic creativity! Excellent capture! #5723480

For me, who would never be able to experience this...thanks for sharing...awesome image! #5725116

Thank you Candice, Linda, Raquel and Melinda. I had more fun doing this photo shoot with this pelican than any others I have taken. Thanks for visiting, your comments and sharing the fun with me. #5746174

What an amazing portrait Bob, I really like the sharp tack focus. #5928815

Copyright for this gallery photo belongs solely to Robert G. Stalnaker.
Images may not be copied, downloaded, or used in any way without the expressed, written permission of the photographer.
Log in to follow or message this photographer or report this photo.