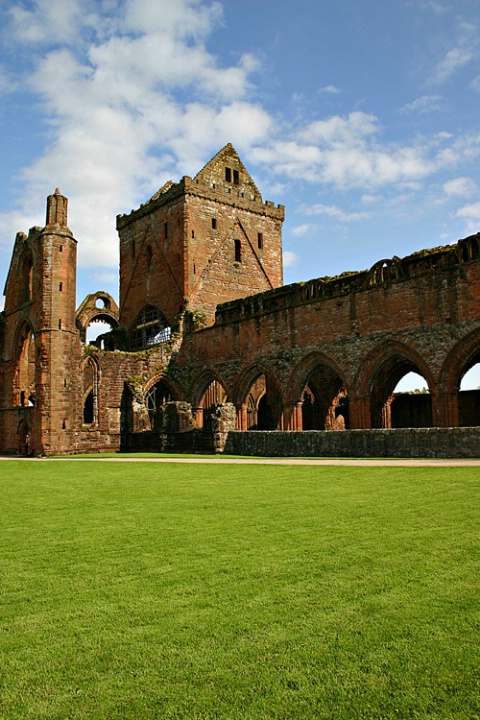 On 10 April, 1273 Lady Devorgilla of Galloway established a new Cisterian abbey as a lasting memorial to her true love, her late husband, John Balliol whom she wed in 1233.

Devoted to each other in life, Lady Devorgilla was devastated when her husband died in 1269. She had his heart embalmed and placed in a tiny ivory casket which she held close to her own heart for twenty years, carrying him with her wherever she went.

When she died in 1289, her body was laid to rest in the sanctuary of the abbey she had founded, and upon her instructions, the tiny ivory casket which held her husband's heart was buried beside her.

The abbey was named Dulce Cor, or Sweetheart Abbey in memory of Lady Devorgilla.

'Two hearts intertwined will forever be held together'.

I forgot to mention that this photo was taken in Scotland. #602562

I like your choice of including the lawn in the foreground: it gives it a good sense of scale. Nice detail and comp. Great story, too! #3929821

Beautiful picture. Next summer I'll go to Scotland. I hope to take photo like this. Compliments #3930262

What a wonderful love story...amazing that it happened so long ago, Cathy!! The Abbey is really beautiful and your image really does this landmark structure justice!! #3930282

Copyright for this gallery photo belongs solely to Cathy M. Gromball.
Images may not be copied, downloaded, or used in any way without the expressed, written permission of the photographer.
Log in to follow or message this photographer or report this photo.