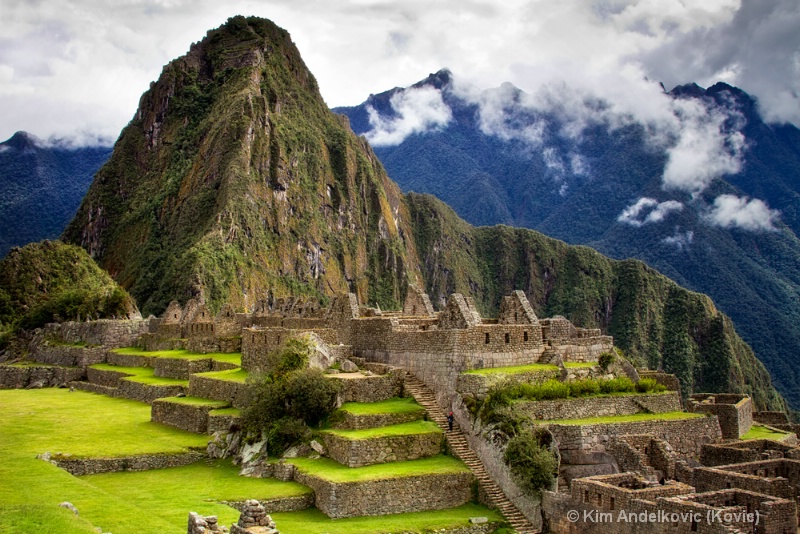 Love all your travel images and this is absolutely gorgeous Kim! Congratulations! #10752657

That must be a great place when you are able to see it without people.
Great light too.
Big congratulations on your gold win, Kim. #10753786

Huayna Picchu also known as Wayna Picchu ("Young Peak") is a mountain in Peru around which the Urubamba River bends. It rises over Machu Picchu, the so-called lost city of the Incas, and divides it into sections. The Incas built a trail up the side of the Huayna Picchu and built temples and terraces on its top. The peak of Huayna Picchu is about 2,720 metres (8,920 ft) above sea level, or about 360 metres (1,180 ft) higher than Machu Picchu. According to local guides, the top of the mountain was the residence for the high priest and the local virgins. Every morning before sunrise, the high priest with a small group would walk to Machu Picchu to signal the coming of the new day. The Temple of the Moon, one of the three major temples in the Machu Picchu area, is nestled on the side of the mountain and is situated at an elevation lower than Machu Picchu. Adjacent to the Temple of the Moon is the Great Cavern, another sacred temple.

Copyright for this gallery photo belongs solely to Kim Andelkovic. Images may not be copied, downloaded, or used in any way without the expressed, written permission of the photographer.
Log in to follow or message this photographer or report this photo.