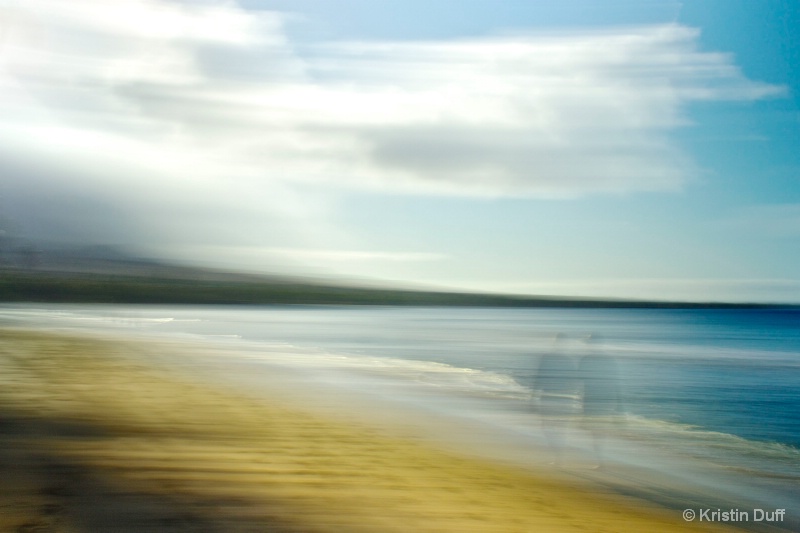 Cool, Kristin. You have a great combination of static and motion blur content in this along with the shadow figures.

Hilites may be blown just a bit. The mustard tones of the sand aren't quite pleasing to me. A little desaturation and hue shift towards the yellow? #10567263

This is beautiful to both my eyes and my mind, Kristin. It has a dream-like quality and this might sound strange but I 'see' it best when my eyes are closed. Memories are made of this!
As for the sand color, I much prefer the original yellow.
#10567998

the second version is an improvement on this fantastic image. I agree that it is a tad dark. A slight levels adjustment should help, but it won't need much. #10568018

Kristen, I really like the tones of the original best out of the two. I like the feel of seeing their ghostly images very nicely done. it makes you start thinking about all the couples that has walk down that beach line. great job! #10568177

This is a very appealing and well thought out image Kristin. I like it a lot. As far as the color goes, if you apply the auto levels adjustment to the second image posted, I think you will have the beach color exactly right.

I would like to see you experiment a bit more with the opacity of the couple. They are almost too vague. #10568225

Dale this photo is right out of the camera. I don' think I can play with the opacity. They were in the photo not added in photoshop. #10568431

Well, now you need to explain how you took the shot. :o) They are not blurry enough to have this a diliberate moving camera so I'm puzzled how this look could be out of camera. C'mon, give. :o) #10568466

Oh Dale you drive a hard bargain, but you know I am not that advanced with photoshop to pull this off...check the email I sent you lol! I had a neutral density filter on the camera and panned as I released the shutter. Here is another shot from the same time period. #10568489

Kristin...you did a great job of envisioning this and pulling it off. I, too, had a very hard time of figuring out how you got clearly panning-induced motion blur in the sky and horizon but not in the people or the low surf along the waterline and I had reached the wrong conclusion that this was a composite.

I had tried something similar but not nearly as successfully, a couple of years ago in a capture of flying Sandhill Cranes taken under very low-light conditions and ended up with similar static outlines of the cranes, but in my case the motion of the outlined figures matched the panning speed, which wouldn't be reasonably true of your two beach strollers.

Thanks Kristin. I love the effect and will have to give that a try. The second shot turned out even better I think. #10568628

Beautifully executed and to have done so in-camera and not as a composite in PS is pretty amazing to me! Nicely done! Be sure to enter it in the contest ~
#10568750

Nice job Krisin...I prefer the tones of the 2nd post and would like to see what some of the tweaking that was mentioned would do for it... #10571846

I like the original color as well, but would like to see the suggestion from Dale. The second image is best, though. Love the simplicity and stunning light. #10571858

That is really cool! I thought this was some composite you put together. Really nice. I think I like the original best. I also really like Turtle Rock. Looks like a beautiful place to be! #10572075

Really interesting shot! I love the effect, I would love to see the second one tweaked. Turtle Rocks are awesome.. #10572514

I like it a lot...make sure to enter it! The only thing missing would be some faintly partially washed away footprints...but then ghosts don't leave footprints, do they? ;0) #10573900

I like the natural sand color of the last post. Thanks for trying out all our suggestions. This is a really cool concept. #10573903

Are you allowed to enter the same photo in different categories? #10573905

Kristin ~ This is really neat. Gorgeous photo and very creative idea.
I like the last one as well with the natural sand color. #10574243

Answer to your contest question. No, an image may only be entered once in a given month so no you cannot enter the same image in two categories that month. It is OK to enter it the following month or later.
In theory because you have done some adjustments to it you could upload it into your gallery with a different name and then it would be given a different BP ID number which their computer would accept. However that hardly fits in with the spirit of the rule and with your image, the new version only has to wait a week and it will be March so it will get accepted. Good luck. #10577877

Very nice in-camera effects, Kirstin. I like the latest the best and think it will fare well if you put it in the contest, good luck!!!

Copyright for this gallery photo belongs solely to Kristin Duff. Images may not be copied, downloaded, or used in any way without the expressed, written permission of the photographer.
Log in to follow or message this photographer or report this photo.