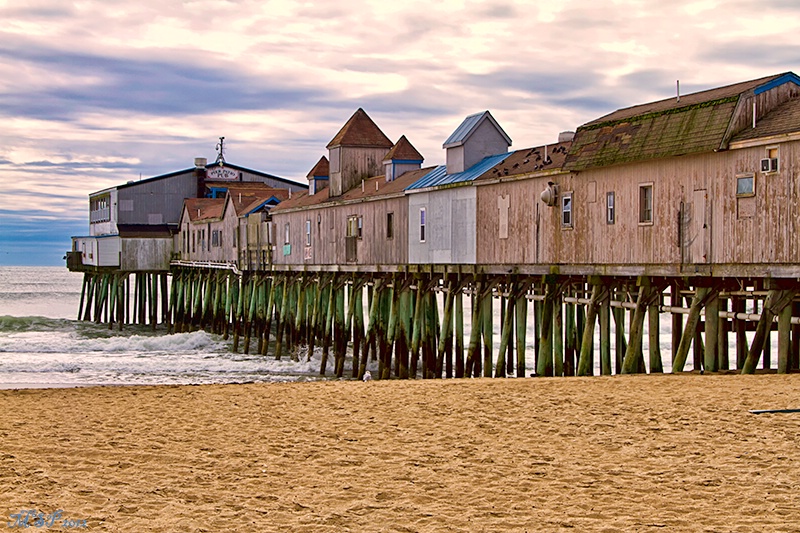 In November 1898 the pier and casino were partially destroyed by a storm . The casino was rebuilt in 1899. In August 1907 the entrance was destroyed by fire and rebuilt in 1908 only to have one of the pavilions swept away by a storm in March, 1909 leading to the casino shortened by a 1,000 feet.

Over the years storms continued to destroy parts of the pier causing the casino to be razed in 1970. A blizzard in 1978 destroyed the remainder of the pier.

As a child my family vacationed in the Wells, Maine area and we went up to Old Orchard Beach to play Skeeball and some of the Palace Playland games. I was never allowed to go to the pier. Much too adult for a pre-teen. My memory of Old Orchard Beach was that it was pretty seedy. Still is, but there are a few glimmers

Coastal piers such as this are always targets of the wrath of nature from the sea but somehow we always rebuild them again and again. Love your angle and perspective to include the textures of the beach, the wave action of the sea and that amazing sky. This is the total package Dave. Well done my friend. (ps I did not know we had green coffee beans for weight loss. Don't believe it.) Rock on. #1494050

A wonderful story telling old structure David! A wonderful time of day for this excellent capture, and thanks for the history! #10381159

That pier sure has had a lot of history David, thanks for sharing that and your beautiful image of it. #10381431

A glorious capture that proves that "You CAN go back!" Also loved reading the description of its history and your memories. #10381593

Beautifully seen and captured...wonderful light, tones and detail. Love the pier and hope to see this one again. #10383023

What a wonderful find Dave, love tghe diagonal lindes and also the history! Hope all is well with you!

congratulations for your beautiful finalist! #10439538

Hi David,Big Congratulations my friend on this beautiful finalist!!!! #10440129

Congratulations on this beautiful finalist, David! #10441587

Love everything about this Dave, especially the history. Huge congrats on this gorgeous finalist. #10441985

Such an excellent scene, Dave. Congratulations on your finalist. #10442245

A very interesting place! Love the clarity throughout the photo. Congratulations on the finalist! #10443250

Congratulations on your beautiful finalist! #10447499

Wooo hoooo! Congrats Dave! What a well deserved month for you!!

To my photo friend:
Look back with pride,
Look forward with excitement,
Enjoy the success of the day.
CONGRATULATIONS! Merna
#10450666

Congrats on your finalist David! This looks like a great place full of nice memories! Somehow I didn't think it was in Columbus :-) #10451373

Copyright for this gallery photo belongs solely to David Phalen.
Images may not be copied, downloaded, or used in any way without the expressed, written permission of the photographer.
Log in to follow or message this photographer or report this photo.