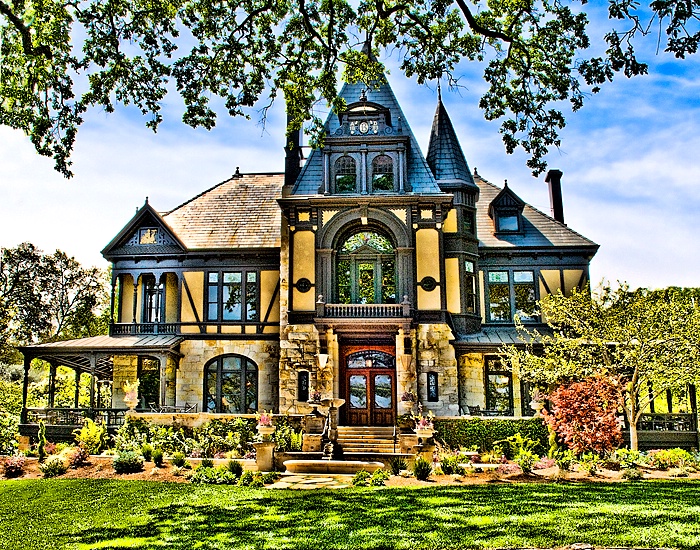 Jacob Beringer, along with his brother, Frederick Beringer, immigrated to America in 1868 and soon after arrived in the Napa Valley of California. They purchased land for the first Beringer Vineyard in 1875. The Rhine House, a classic example of ornate Victorian architecture, was completed in 1884 by Architect Albert Schroepfer for Frederick Beringer at a cost of $28,000. Beringer Vineyards holds the distinction of being the oldest continuously operating winery in the Napa Valley. It is also one of the very few wineries that survived the draconian prohibition of 1922, which lasted over a decade. The estate is also in the National Register for Historic Places as a historic district, a status it has held since 2001

Outstanding capture of such an historical house. Your great information just adds to the image. #10222940

Love the colors & detail in your treatment of this historic house! Beautiful!
#10225436

Like the way you included the tree and your presentation #10227427

What a cool looking house, so well captured. Love this image, Dave, and the information is fascinating! #10229454

Love the history and the wonderful treatment that makes this image magical. #10323409

What a beautiful place and with such rich history. I really like your treatment here, Dave. Great choice! Topaz?


2-for-1 Super SALE on Websites/Galleries and Interactive Courses ends in...

Copyright for this gallery photo belongs solely to David M. Montero.
Images may not be copied, downloaded, or used in any way without the expressed, written permission of the photographer.
Log in to follow or message this photographer or report this photo.