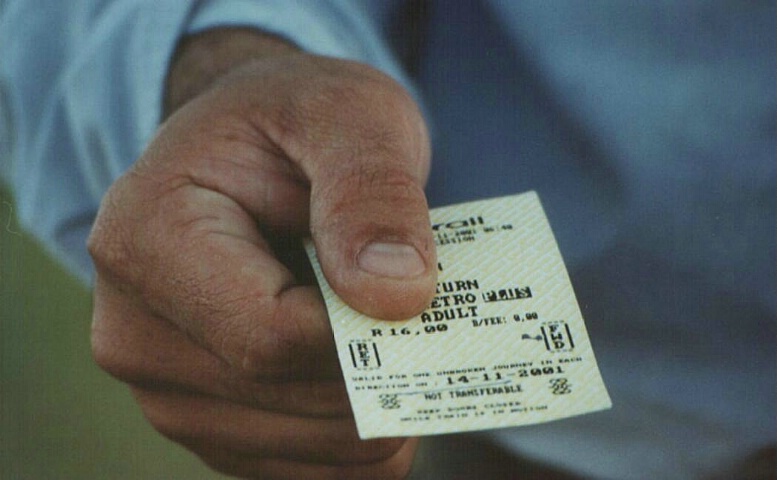 This is the first photo that I have submitted. I would love any feedback. This was shot with a 70-210mm zoom, F2.8.

There's something about this image that I find comforting...it tells a story in a soft way. It doesn't want to slap you on the head but it is more than just a 'record' shot. Perhaps it's the muted lighting? I really like the texture on the hand. Maybe you could have gotten just a bit more of the in focus? The only other thing is that the hand is cropped perhaps a bit too much? But I'll bet your original is missing those fingers too. Still, all in all a good image. #2518

Nice compostition and depth of field. I like how the ticket is the sharpest part of the picture giving it that "story telling" quality as Richard mentioned. Good job Laura! #4021

The depth of field is the strongest aspect of this photo. The ticket is in sharpest focus, and the remainder of the image moves slowly to an ever so soft blur.

However, I would like to see the entire hand rather than its being cropped at the bottom. I am wondering how a change in camera angle would have affected this.

I am also not sure how I feel about the colours. I, personally, don't care for muted colours, unless they are used for historical context. This means that I would rather see this shot in full, bright colour or in black and white. I think that it would work best in B&W, but it is difficult to tell how the colours would interact with each other when turned to grayscale.

As for composition, it's strong. But, I would like to play around with the angles in this one. Perhaps, it would look even stronger from a slightly different perspective, either left or right.

I am also wondering how this photo would look had you captured it with a turnbuckle. You could have zoomed out more, not putting so much emphasis on the hand and ticket. Rather, you would let the all aspects of the photo tell your story. This would also hide the writing on the ticket from the viewer, making them use their imagination more. I am also wonder how a vertical alignment would look with a turnbucke in the scene.

Thank you all very much for the comments. You don't know how much they help. To Jill and Glen who's work I absolutley love, thank you for taking the time to comment.
Richard, you make a good point about the missing fingers. They are also missing from my original. I did no touch ups, except (in a later version) to soften a hair mark. It was taken in the late afternoon on a semi-cloudy day, so that gave the effect of the muted lighting. #4032

Glen,
I grey scaled the picture. I see what you mean. It gives a very different feel.
When you refer to the brighter colors, would I achieve that with a bigger f-stop?

Once again, thank you very much for the input.

Copyright for this gallery photo belongs solely to Laura Johnson.
Images may not be copied, downloaded, or used in any way without the expressed, written permission of the photographer.
Log in to follow or message this photographer or report this photo.