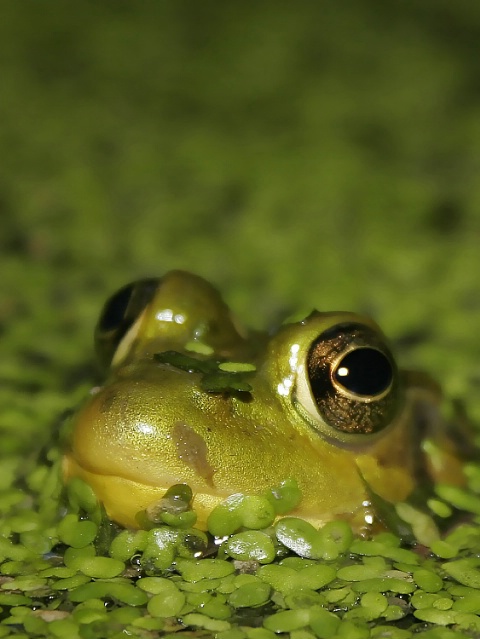 Many congratulations on your wonderful and well deserved finalist, Brian! #1873068

Awesome shot, Brian! Thank you for sharing your experience getting it! It brought a smile to my face! #1875805

Brian--such a beautiful nature image. Hope you didn't get too wet! Congrats on Finalist!! #1877563

Brian this is awesome...I believe I saw it win on another site also...I love it, frogs are my favorite. I guess all your patience paid off...good luck in the next round. #1879102

LOL very cute photo, he almost looks like he has gold on his face!! Congrats on your finalist! Good luck next round! #1881312

Laying on my stomach in the wet muddy leaves at the edge of a bog, I waited patiently for this little fellow to surface with my arms outstretched. Surface t did, but not in front of the lens, so I began to move my arms to the direction from where it now looks on, and when I thought everything was just right, the frog dove again. We played this game for about five minutes, then finally, I think I figured out it's pattern, as my little green playmate came up right in front of the lens. Without an active display on the back of the camera, I had no idea the the frog was in focus, but the cameras beep told me something was. This is the end result of my lay in the mud. :)

Copyright for this gallery photo belongs solely to Brian D. Watters. Images may not be copied, downloaded, or used in any way without the expressed, written permission of the photographer.
Log in to follow or message this photographer or report this photo.