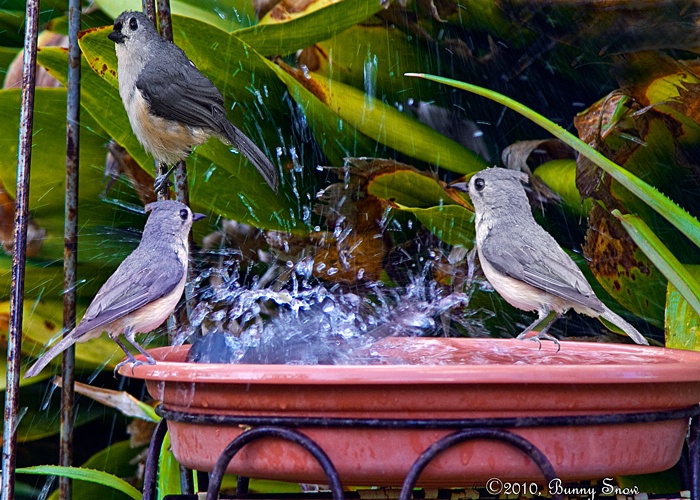 Everyone is following the lead of the Blue Jays and spending a portion of every day at the Snow watering hole for dipping and drinking, along with some tasty snacking. Here, the Tufted Titmice have taken over.

Actually, the original of this image is under the water, others were taken at the same time as the bird moved within hundredth's of a second to various locations around the "pool."

Thanks, Joy. I love capturing the birds at the watering hole. They are like small children at a swimming/dipping pool either tip toeing around, watching, or plunging head first into the water.

There are four birds in this composite. The original is under water. But, within .01 of a second the titmouse surveyed the situation, entering the water, staying underwater facing the bottom, and then got out and climbed the pole to dry.

One bluejay was in the water over and over again before he announced to his friends, persumably that the water's fine! Come on in!!!

What a wonderful fun shot Bunny! I have decided to buy a bird bath, so I can attract more birds for photographing. #8733574

Thank you, Leslie and Amanda. All the birds enjoy their bird bath. It's really very simple. I have several plant stands and put a plastic plant saucer into one of the stands. Then, added a hose which I wound through a standing trellis (which was stuck deeply into the ground)and aimed at the plastic saucer.

The blue jays discovered this first. With the water raining on them from above, they stood on the edge of the saucer and eventually dove in, head first. Then they rolled around, scrubbing the dirt from their feathers and having a wonderful time.

I simply captured the bird in various positions around the bath and as he jumped up to the trellis pole to dry off. This was one bird, with my camera set to continuous and the trigger held down capturing 5-6 frames per second.

Then, using a pen tool at 400%, I selected a path around the titmouse using a technique I learned from Jim Zuckerman (Creative Techniques) and created a selection. I had problems isolating out one area of the feeder, and if things ever slow down, I'll try and correct that. But, using one bird in its different positions, I told a story of the fun and cool refreshment the bird(s) are having at the bird bath.

Thank you all for your comments. This was both fun and frustrating, at the same time. Sometimes things don't go as they should. It takes tenacity!

I'm trying to get the birds to come to a bird bath near the window where I capture them, closer, as I cannot afford a longer lens (needed to fill the frame and reduce the lost resolution). So far, no dice. It they become hot enough, maybe they'll come closer.

Copyright for this gallery photo belongs solely to Bunny Snow.
Images may not be copied, downloaded, or used in any way without the expressed, written permission of the photographer. Contact photographer via gallery
Log in to follow or message this photographer or report this photo.