The Symbol of Love 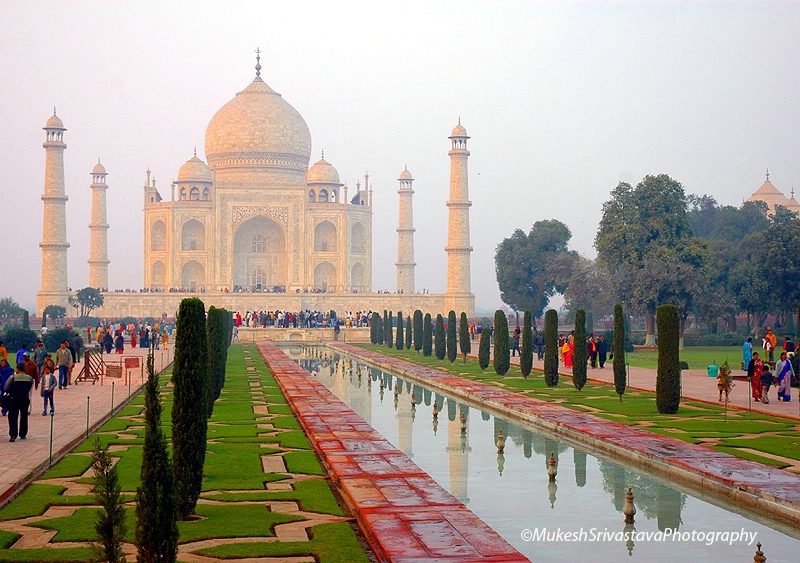 The beauty of Tajmahal was shot in the evening golden light on 10.1.09 at Agra, India.As a photographer, it was my dream to capture the effect of golden light on the monument made of Marble.

Tajmahal is the symbol of Love. It was constructed by Shah Jahan in the memory of his beloved wife Mumtaz.

Taj Mahal is regarded as one of the eight wonders of the world, and some Western historians have noted that its architectural beauty has never been surpassed. The Taj is the most beautiful monument built by the Mughals, the Muslim rulers of India. Taj Mahal is built entirely of white marble. Its stunning architectural beauty is beyond adequate description, particularly at dawn and sunset. The Taj seems to glow in the light of the full moon.

Taj Mahal was built by a Muslim, Emperor Shah Jahan (died 1666 C.E.) in the memory of his dear wife and queen Mumtaz Mahal at Agra, India. It is an "elegy in marble" or some say an expression of a "dream." Taj Mahal (meaning Crown P

WoW, this so lovely, Mukesh Great POV and presentation.

STUNNING!!!!! I especially love your POV here, Mukesh! Off center! Beautiful composition, color and soft light! We'll be seeing this one again! #7029447

Superb capture of the Taj, Mukesh! Love the dreamy quality this has -- the mist, the magical quality of light! Beautiful! #7029462

Awesome capture of this beautiful structure, Mukesh. Keep them coming.

Big congratulations on this beautiful finalist and good luck for the next round.
#7198485

CONGRATULATIONS on your outstanding finalist. Best of Luck in the next round. #7198548

MUKESH! Two finalists in one day my friend! Maybe there are even more???

Congratulations on your fantastic finalists, Mukesh! #7200647

And another huge congratulations on this stunning finalist, Mukesh!! #7204027

CONGRATULATIONS on another awesome Finalist, Mukesh.

Congratulations on your finalist! A beautiful image! #7205352

A Hugr Congratulations on this excellent finalist Mukesh Bhai!! #7205681

Congratulations Mukesh, hope to see this again in the gold!

Copyright for this gallery photo belongs solely to Mukesh Srivastava.
Images may not be copied, downloaded, or used in any way without the expressed, written permission of the photographer.
Log in to follow or message this photographer or report this photo.