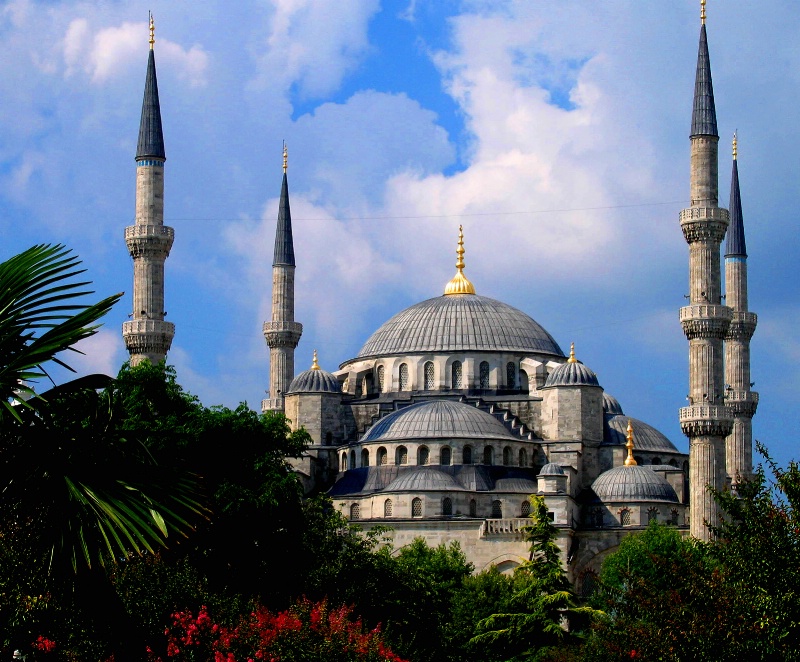 Great sharpness and color, Vladan. This looks like a beautiful place. #6257579

IT'S A WONDERFUL IMAGE.

Glorious comp, light and color on this outstanding capture, Vladan #6259486

Absolutely sensational composition, color and detail in this image, Vladan! This is my favorite of your mosque photos! #6260146

Wow! Awesome structure and it's so beautiful. Hope to be able to visit this someday and thanks for sharing! #6265328

Thank you very much everyone for your terrific and lovely comments! #6270642

This is a perfect photo of amazing architecture. I had never seen this before. Thanks! #6280997

This is gorgeous! Fantastic color (especially the blue sky), lighting, POV, and comp. Your clarity is awesome! You have the chance to see some beautiful places, and through these captures, I get to come along. Thank you! #6281257

Love the Mosque architecture framed so well with lush FG and beautiful sky Vladan. Well composed. The only thing I might've done differently would be to remove the electrical wire running through the frame..
Well done!
Howard #6287124

Stunning image Vladan. Your POV was perfect for a dynamic composition. The vertical lines of the spires compliment the dome shapes in the center and the detail is outstanding. Excellent work. #6317437

Huge congratulations,Vlandan on yet another wonderful Finalist! #6489316

Congratulations on your finalist, Vladan! #6491581


CONGRATULATIONS ON
THIS FABULOUS FINALIST!!!!!
WAY TO GO!!!!!

Congratulations on your terrific finalist! #6494178

stunning and well deserving of this finalist egg. Congrats Vladan #6494708

Congratulations on your superb finalist! Favorite. #6495521

Vladan- I knew these beautiful pictures of these fasinating buildings would get you the deserved reconition they deserve. Know we will be seeing alot of them heading for the winners circle. Congratulations. #6495614

Congratulations on another wonderful finalist Vladan!! #6496014

Huge congratulations Vladan on this beatuiful finalist!! Best of luck in the next round!! #6496221

Huge congrats on all your beautiful finalists, Vladan!! #6497359

Congratulations on your finalists, Vladane. Good luck in the next round. #6500126

Thanks so much for all of your congratulatory remarks. I appreciate them all! #6500159

congratulations on another wonderful finalist, Viadan! #6500830

Outstanding capture with a fascinating history, Vladan! Congratulations on its selection as a finalist! #6508049

Thanks you for all of your congratulatory remarks and terrific comments, BP friends.

This looks familiar. I spent time outside the Blue Mosque capturing people at prayer while awaiting from rest of our tour.

Now I better understand your comments on my image. We were both fascinated with the Blue Mosque, as are most tourists. #7353891

The Blue Mosque was commissioned by Sultan Ahmet I as a rival to Hagia Sophia and designed by architect Mehmet Aga (Aga's unfortunate predecessor was fired - i.e., executed). Construction on the mosque began in 1609 and took seven years. Sultan Ahmet died only a year after the completion of his masterpiece, at the age of 27. He is buried just outside the mosque with his wife and three sons. One of the most notable features of the Blue Mosque is visible from far away: its six minarets. This is very unique, as most mosques have four, two or just one minaret. According to one account, the Sultan directed his architect to make gold (altin) minarets, which was misunderstood as six (alti) minarets.

Copyright for this gallery photo belongs solely to Vladan D. Djordjevic. Images may not be copied, downloaded, or used in any way without the expressed, written permission of the photographer.
Log in to follow or message this photographer or report this photo.