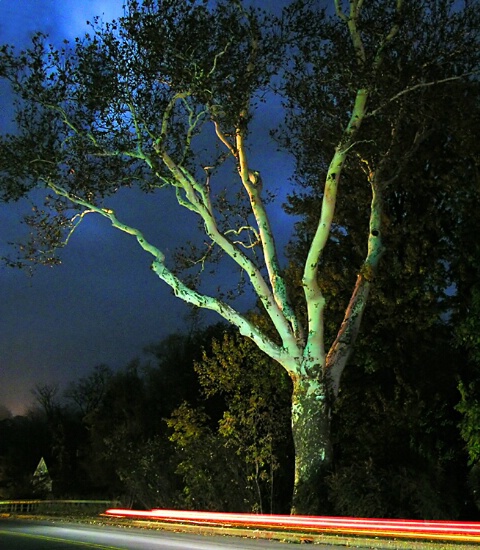 F 2.8, 4 Sec., ISO 250. I've been fascinated by this tree for some time, but never thought of photographing it at night, until I was exploring for photo ops with the full moon. Its wonderfully reflective bark caught an amazing array of colors, accentuated by the lights from a passing motorist.

Magnificent capture and photograph, Dorothy, I love the lighting and the sky is magnificent. Very well done, my very dear friend - your good friend, Allan #882631

Wow! Outstanding, Dorothy!! The unique lighting and shape of this tree, along with your superb capture make this a very dramatic, stand-out shot! Excellent! #883399

Thanks so much, Karen and Dan. I'm not sure what variety this tree is, but it's unusual in Central New York. This is a magnificent specimen.
#883556

Great job on your composition and exposure to capture the fading light reflected on the tree and in the sky, Dorothy! #883947

Thanks, Carol. I'm frequently amazed what adjustments to levels and contrast can do to bring out color and detail in a photo taken with limited light. It has become one of my favorite ways to take photos! This photo was taken about 5:30 a.m., long before the sun came up. #884247

It's a Buttonball tree. Elsewhere on the net I found that it's a zone 4 tree... so it's unusual this far north. This one was planted by the Clinton Horticultural Society, around 1890. So it really is an old-timer. I know of one other on the north side of the river. --sis

The American Sycamore is not only one of the tallest trees, normally reaching over 100 feet in height, but is also one of the most massive inhabitants of the North American eastern hardwood forest. Also know as the American Planetree, Buttonwoods, and Buttonball-tree, it is often found in bottomlands and along the banks of rivers and streams.

The American Sycamore has an immense trunk and a wide-spreading open crown of big crooked branches. The mottled bark exfoliates in flakes to reveal a palette of creamy white, tan, yellow, and greenish-white colors appearing on the underbark. The fruit, a rounded, dense, brown ball, one inch in diameter, is borne singularly from two to three inch long stalks. This latter feature assists in identifying the American Sycamore from other Planetrees which produce multiple fruit balls in clusters.

The American Sycamore is a fast growing tree even in city conditions, and is capable of attaining a height between 75 and 100 feet with a similar or greater spread in urban environments. The Buttonball-tree, because of its massive proportions, is best planted in wide open spaces like public parks in a slightly acidic deep, moist, rich soil environment. The American Sycamore is very susceptible to the fungal disease, anthracnose, which attacks the twigs and foliage causing extensive dieback to both, especially during wet, cold springs. #885062

Awesome special effects shot! I love the streaks of red and the highlights on the tree! And Allan's right, the sky's great!

One suggestion: you might want to clone out the reflection off to the left of the tree. I'm not sure if it's a sign or what, but it's a little distracting.

Thanks for your comment, Pam. I wasn't sure whether to clone out that triangular shape or not. It's a house. Thought it was a reminder that this is a tree in a residential area. #886550

Ah-ha! a house... I couldn't see that until you told me what it was, now it's obvious. I'm not sure, but I still think you might want to clone it out. I do like the idea of showing that this is a residential area, but I think that the top of the house that you see looks really small compared to the tree from your angle and so it's a little hard to tell what it is.

I love the shot, though!

You may be right about the house, Pam. The part of this image I'm a little unhappy with is the trunk of the tree. I think I should have sharpened it just a little bit more. #886638

hmmmmmm. I like the house. From a design perspective, I think it balances the composition. :-) #897402

Copyright for this gallery photo belongs solely to Dorothy Neumann.
Images may not be copied, downloaded, or used in any way without the expressed, written permission of the photographer.
Log in to follow or message this photographer or report this photo.