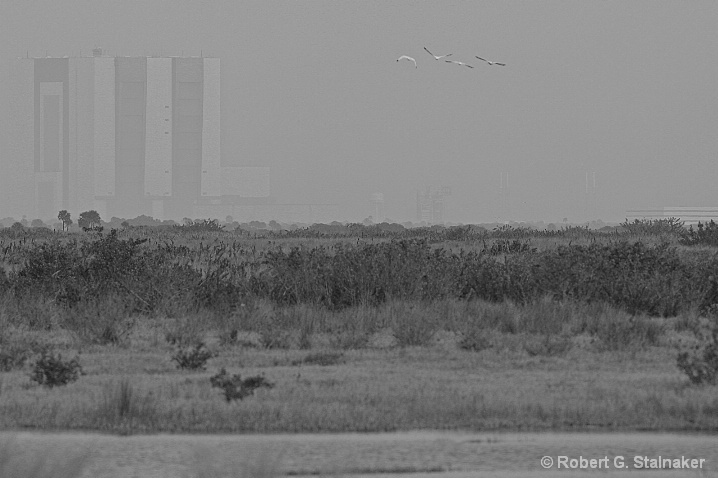 I waited quite a while but finally got some large birds flying into the smoke and toward the VAB for the image effect I wanted. It seemed every time birds entered the frame, they were going across the frame, but finally these four white ibis came through for me. #888305

With heavy smoke still enshrouding the Space Shuttle's Vehicle Assembly Building, it hit me what a poignant image lay before my eyes, and I felt foolish I never recognized it earlier. NASA set a "prescribed burn" in a very large area surrounding the Space Center for the benefit of the Florida Scrub Jay, a species threatened with extinction that needs fire for its specialized habitat. The Space Center is one of the last areas for the few numbers that remain. After spending the whole day in the area, I was getting in my car to leave when I looked back and the image hit me. As NASA reaches for the stars and the search for life, man is destroying species on earth, the Florida Scrub Jay just one of many. NASA's effort is noble, but Florida's land developers will consume the last remaining scrub areas over the next decade.