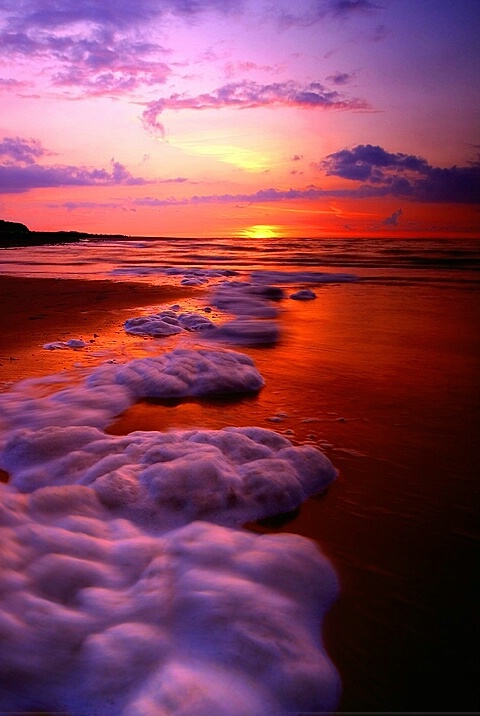 WOW! The sea foam makes it look like you could walk on clouds. Great colors and I love how the foam leads your eye to the sunset/sunrise. Nicely done! #596388

This is absolutely beautiful, stunning! Congratulations! #597595

I love the spectacular color and the intentional blur of the sea foam. Congrats Bob! #600120

I'm so glad to see this beauty as a winner!! Congratulations on your second place win, Bob! Very well deserved! #600505

Congratulations on your win, a beautiful image! #601269

WOW this is outstanding , beautiful colors, Congratulations on your well deserved win !! #602178

Bob ...your photography just keeps getting better and better! Congrats to you my WElsh friend! You're one of the best! #606515

Congratulations, Bob, what impressive colors, composition, and exposure in this amazing image!! #607499

With all due respect to Bob, this shot is way, WAY too color saturated. Actually it's not the shot--which is technically sound and artistically pleasing, saturation aside--it's obviously the digital post-processing.

As a general observation and not a criticism, I simply do not understand why grossly oversaturated sunset shots like this are SO popular (even with a photo-savvy audience), and win so many amateur contests! For example, this shot is so unnatural-looking, it's distracting. And for purely "artistic" value, the artifacting caused by too much saturation is glaring. (Notice the uneven tone, bleeding, uneven color shifting, etc.) If I were judging, I would severely penalize this, and shots like it, on over-saturation alone.

To my eyes it would have been a GREAT shot if it wasn't so severely oversaturated. I looked at Bob's gallery and he is very talented and has some great shots, and obviously doesn't need any suggestions on HOW to not over-saturate it. (I really love his wide-angle shot of the sheep in the green valley.) Although, there are a small handful of other oversaturated shots--but not as bad as this one.

A small gripe I have with this site, related to this, is a total lack of constructive criticism. We NEED constructive critiques to collectively grow as artists and technicians. Instead, it seems to be all sunshine and glowing superlatives, even for really horrible submissions--whose creator could really benefit from constructive pointers from the more experienced members. It's obvious some people feel compelled to encourage newbies to keep at it, but heaping praise on shoddy work doesn't work for toddlers, much less mature adults who would really appreciate specific pointers targeted specifically to their submission, and from which they could truly benefit from! (I will say though that the total lack of UNCONSTRUCTIVE flames is very nice, and a nice change of pace from most places on the internet in general.) I would suggest a change to the site: instead of just a "comments" field, call it, "What I like about this shot". Then add another field called, "What could be better"--which would encourage everyone to offer constructive criticism for every comment, rather than just blowing sunshine up you-know-where!

So, departing from high-concept discussion, here's my constructive criticism specific to this submission: Bob, nice shot. You are obviously a skilled artist. But I wouldn't have used nearly so much color saturation! Perhaps try not using the Hue/Saturation dialog, or if the over-saturation was a side-effect of increasing the contrast, use Hue/Saturation to back it off, back to natural levels. I know amateur contests seem to favor grossly oversaturated sunset shots regardless of the presence of over-saturation artifacts, but buck the norm!

Also, one reader commented "nice selective blur on the foam". It looks to me that it is "UN-selective", natural blur, induced by motion and a slow shutter speed, rather than in digital post-processing as apparently suggested. That's a second [very small] gripe I have with this site (although overall I love it)--the comments are mostly stand-alone, not interactive and feeding off one another. No one else corrected, countered, corroborated, or even mentioned that comment about the foam. I'm not sure how to encourage that better though! Ideas? ;-) #610292

I was reading jim collier's comments and along those lines I would like to see along with the winning photos the reasons why each winner was chosen...what about the photo/art piece was singled out as a winner. I think this would help the rest of us develop our skills and continue to learn. I also like the idea of ""What I like about this shot". Then add another field called, "What could be better"--which would encourage everyone to offer constructive criticism for every comment" that Jim mentioned.

This is a wonderful site. I have taken over a thousand dollars worth of classes and visit it every day to try to learn more to improve my own work.

And Bob I like the photo. I live in an area where our sunsets/sunrises and not nearly this colorful but I am sure there are such in other parts of the world. #635476

Who says colors have to look "natural"??

While I can respect photographers who don't care for lots of bold color, it is important to keep in mind that we can manipulate our photography for the effect we like just like painters do and it is still an acceptable art form. Painters overexaggerate strokes, colors aand reality all the time, and no one complains about that. The only time I feel it is not acceptable is with photojournalism...as that is the art of capturing reality. Ansel Adams was the father of manipulation though many may not realize it. What came out of his darkroom was not what he really saw....dodging and burning to his heart's desire to achieve the effect he felt would have greatest dramatic impact...and people loved his work! Sure color wasn't overexaggerated (how can it be with B&W?)...but his skies were! Composites sell...yet they're hardly real. And who cares?? It's how it makes you feel that matters. If the photo is visually appealing, then the photographer has done his job.

Joy...to request that the professionals who have to judge thousands of images every month spend extra time writing why EACH winner was selected is unreasonable. In fact, we don't pay to enter here....it's free for everyone. To ask them to do more is not really fair. Our photos are judged by professionals and we don't have to pay a thing. They're already giving alot I think. I see your point..but from a site that's free, it's way too much to ask. Imagine how much more time that would take! Just my thoughts.

you're rigtht Dolores there are thousands of entries in the contest each month. But only a few of those are selected. I was talking about the first and/OR second place winners and there are not that many. I was only trying to participate in the discussion and offer ideas. #769433

Hi Joy..I wasnt' criticizing you. I understand you meant the winners only. But you're incorrect in that there's "only a few". There are a total of 111 first and second place winners...and a grand prize. That's 111 commentaries on each winner...that's what I was talking about. And that's not counting the finalists! Judges have difficulty going through the selection process as it is...without 111 commentaries to post in addition to that. It's still an unreasonable request IMHO. Considering what they have to do. #769476

Copyright for this gallery photo belongs solely to Bob Jones. Images may not be copied, downloaded, or used in any way without the expressed, written permission of the photographer.
Log in to follow or message this photographer or report this photo.