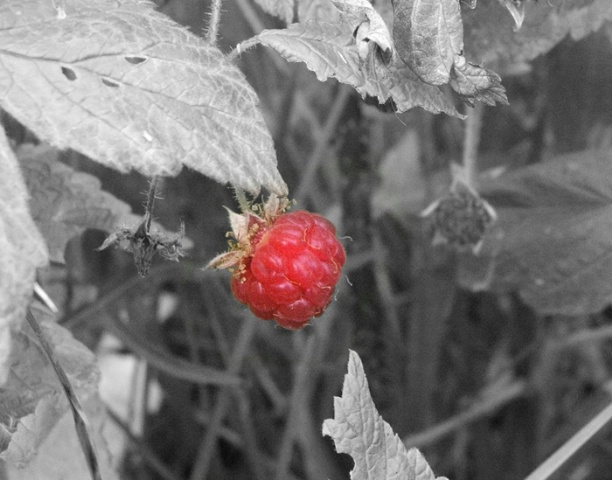 A promise of new life.
When spring comes, this drab scene will be transformed into a beautiful, lush green one.

Hello!
What do people think of my latest image?
(Pam -- you're right yet again -- Photoshop is addictive!)
Thanks in advance for any comments!
Abby #378232

Abby Zabby! Sorry I missed you. i've been busy and things are a ummm challenge ...

Soooo? How'd you do this? did you do that repaint from history thing? I've not figured that out with ps4 yet ... not so easy as in later models.

The best piece of advice I've ever seen on this type of work is to desaturate your colored area a bit. I think it's the industry secret ... because after I saw that I started looking at cards and the like ... and it's true ... they're usually desaturated probably at least 25% and often they have a soft glow too.

Drop me a note any time you want. I've been missing having conversations so bump me with a note from time to time. I usually respond to being bumped ;-D

I can't wait for the berries ... we're going to be back in Oregon just in time for picking season!

Hi again, Pamelise!
I used the Colour paint brush, not sure if it works in PS4, I have 5.5.
Oooh, I'll try that!
I am now PS-addicted, and have gotten into some light graphic design.
Thanks sooo much for starting me on that path, it's been a beautiful walk! ;-)
I will drop you a note as soon as I can.
Oregon? Where? Cool! I used to live there, in Portland.
Did you ever visit the Oregon Zoo, possibly in summer 2003? #2436161

The selective color is what makes this so much more interesting than if it were stricrtly b/w so the dead center berry works. It shows how rules don't always hold true. I like to see rules broken to prove points to people who always go by them and have dull images because of that. #2436857

Thanks, Sumith and Lea, Milan and Madeline for your comments!
I agree, Madeline!
Abby #2438059

The theory goes something like this: Iconic images can stand alone smack dab in the middle because they immediately generate a recognition & emotional response. My emotional response is "mmmm fresh berries and cheesecake at a july wedding at the foot of Mt Hood by the Salmon river ... could it get any better?"

And Abby, don't throw anything at me but ... I'm in a suburb of Portland (have been since Aug) and I've still not been to the zoo. We're suppose to leave in a few weeks ... so I guess I'd better hurry and get there ... but I think we're going to be back from July until the end of November so if I don't get to go maybe i'll still get another chance.

Photoshop is so addictive. It's also been a bloom'n lifesaver since I've gotten so many grainy images from that old HP945. But if I'd not had grainy images, would I have become inclined to be artistic with Photoshop? Maybe ... maybe not.

I had no idea I was opening up the door to graphic design for you ... but it is a very intriguing study. My daughter will have her BS in GD by June and I've enjoyed learning second hand from her studies. She's a total font-obsessive type. LOL and will probably turn making iconic, story-telling printmaking into her art.

OK I promised to tell you my ice therapy if you became addicted to PS ... so ...

1) be sure that you warm up your hands and arms before you start work with gentle stretches.

2) if at all possible have your monitor at eye-level

3) move your mouse by moving your upper arm! this takes practice (and really you're suppose to write in the same way but that's really a lost art)

4) pay attention to your hands and shoulders ... if they ache, do the nice thing and stop ... stretch ... move around for at least 15 min (it'll also help you move past any obsessive focus you might be stuck on ... not that I would ever think you could be obsesseive ... i'm never obsessive ..)

5) if your hands feel tender ... before you return to your desk ... here's the part you've been waiting for ... plunge them into ice water and then ... the sadistic part that I didn't mention ... then plunge them into very warm water ... and then repeat.

don't yell at me! It really works! it gets the blood moving and reduces the swelling.

Cool! I lived in Beaverton for nine months in 2003, and worked at the Washington Park Zoo for the summer.
You should visit there, it's an incredible place.
All the habitats are as natural as possible, so it's possible to get some great shots.
Unfortunately, I wasn't as into photography then.
All the exhibits are cool, but I used to work at Lorikeet Landing, where you can hand-feed lorikeets (makes for some great pics, but don't try to pet them!)

How cool! That would be interesting, to learn second-hand from a BS GD!

Copyright for this gallery photo belongs solely to Abby Way.
Images may not be copied, downloaded, or used in any way without the expressed, written permission of the photographer.
Log in to follow or message this photographer or report this photo.