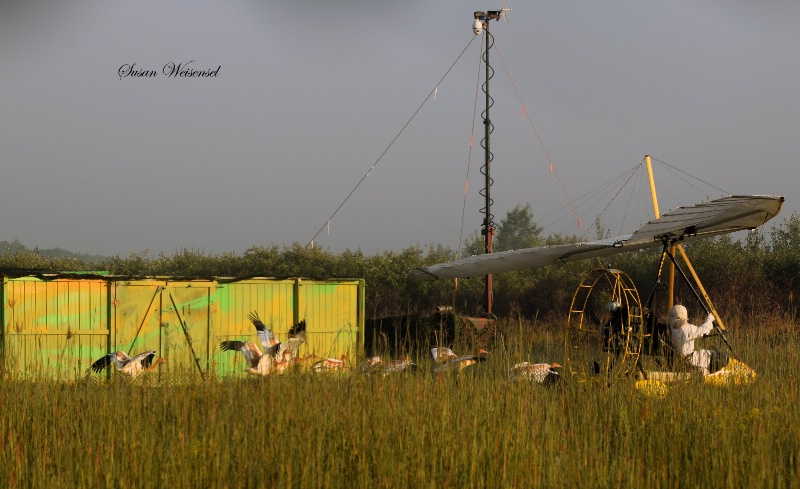 As migration is a learned process passed on from one generation to the next, when the last whooping crane vanished from eastern North America their once-traditional route was lost forever.
Using captive-hatched cranes from breeding centers throughout North America, OM rears and trains whooping cranes chicks to accept and follow it's specially modified light sport air-craft.
Imprinting begins while the chicks are still inside their eggs bu exposing them to the aircraft engine sound.
Once hatched, the young chicks are reared in total isolation from humans. To ensure the impressionable cranes remain wild, the field team adheres to a strict no-talking rule and wears large white costumes designed to disguise the human form. #1582369

At around 45 days of age the cranes are transported to central Wisconsin. Here the team conditions the youngsters to follow the light aircraft, which, along with their pilots, have now been accepted as surrogate parents.
Once the juvenile cranes fledge, flight training continues and they are given daily exercise to build their strength and their loyalty to the aircraft. By early October the cranes have sufficient stamina and endurance to be led on their first migration south.
This image is one of the daily exercises I was invited to witness. #11105321

Co-founded by William Lishman and Joseph Duff who's experiments were immortalized in the film 'Fly Away Home'. Such an awesome undertaking by that organization.

Wonderful organization and a terrific photo! #11105367

WOW! Very interesting process and a great capture. Look what we learned today thanks to you. #11105482

Each year, beginning in 2001, Operation Migration's pilots have led a cohort of captive-hatched and reared Whooping Cranes along a predetermined migration route between central Wisconsin and the Gulf coast of Florida.
In the 1940's, as a result of habitat destruction and over-hunting, Whooping Cranes were on the verge of extinction. Just about 15 birds remained.
Protected by the Endangered Species Act since 1973, the Whooping Crane populations has grown to just over 300. Twice each year this flock migrates between Canada's Wood Buffalo National Park and coastal Texas. A round trip journey of more than 4800 miles.

Copyright for this gallery photo belongs solely to Susan Weisensel. Images may not be copied, downloaded, or used in any way without the expressed, written permission of the photographer.
Log in to follow or message this photographer or report this photo.