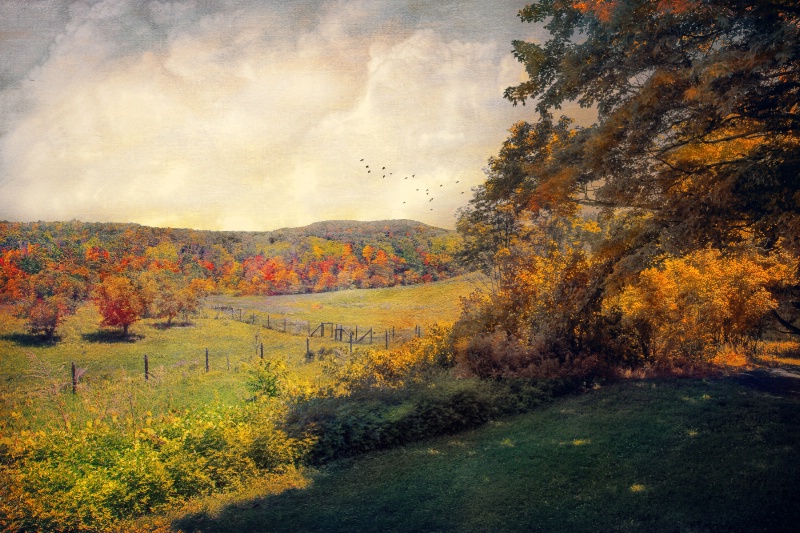 Taken on the farm property of Frederic Church on the Hudson River Valley, N.Y.
Frederic Edwin Church (May 4, 1826 – April 7, 1900) was an American landscape painter born in Hartford, Connecticut. He was a central figure in the Hudson River School of American landscape painters. While committed to the natural sciences, he was "always concerned with including a spiritual dimension in his works."

In 1845, Frederic Church first sketched on the property that was to become Olana.[7] He was then a student of Thomas Cole, now considered a founding figure of the Hudson River School of painters. On March 31, 1860, a few months before his marriage to Isabel Carnes, Church returned to purchase a 126-acre (51 ha) hardscrabble farm on a south-facing slope of a hill in Columbia County, near the thriving towns of Hudson and Catskill, New York.

Congrats on this wonderful finalist Doug!

Surely is a beautiful scene! I would frame and hang that one friend!

Besides being a lovely landscape capture, this scene is a real tribute to the Hudson River landscape painters, and especially to Church himself.
Belated Congratulations on its selection as a Finalist, John. #11111265

Copyright for this gallery photo belongs solely to John Rivera.
Images may not be copied, downloaded, or used in any way without the expressed, written permission of the photographer. Contact photographer via gallery
Log in to follow or message this photographer or report this photo.