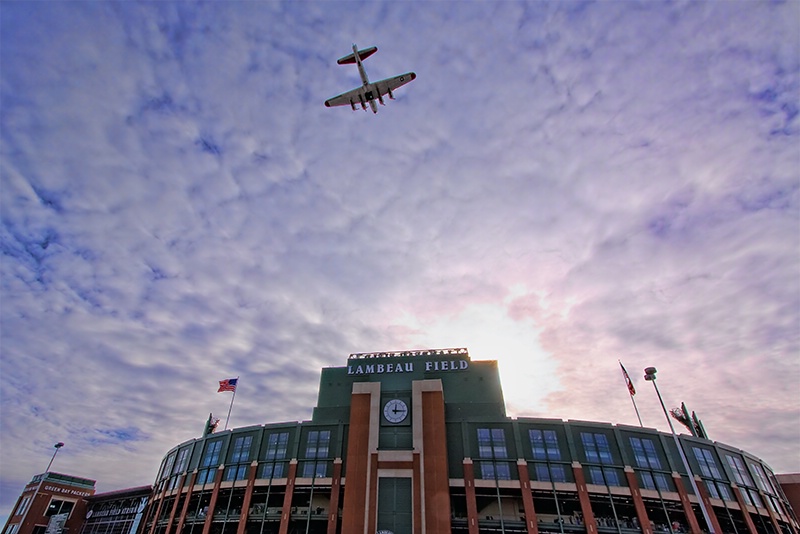 A fly-over by a WWII B-17 bomber prior to the Packer vs Vikings game on 11-24-13. The bomber has been restored by a group at the Experimental Aviation Association (EAA) in Oshkosh, WI. The restoration is painted in the colors of the 398th Bomb Group which flew hundreds of missions over Nazi Germany in WWII. The bomber has been dubbed "Aluminum Overcast".

The bomber flew at 1,000 feet and 140 mph over Lambeau just after the national anthem and prior to the 12 noon game. It is easy to see in the image that the bomb bay doors are open - reports are that passengers on board were shooting photos and video through the open doors during the fly-over. How do I sign up for that gig?

Note that the Lambeau clock is set to "Lombardi time", i.e., 15 minutes early.

The Packers and Vikings played to a 26-26 tie after one overtime under the NFLs new overtime rules.

Wow...this is so touching for me. My dad was a navigator on a B-17, shot down and eventually captured, on his third mission, bombing Berlin. He did survive the one-year ordeal.
----
I would've LOVED to be aboard that aircraft for the flyover. But I think it must've been VERY cold. #1553859

Thank you so much, Michelle for offering your perspective. My thanks to your Dad for his service and sacrifice. Sounds like you need to make a visit to the EAA Museum in Oshkosh - a very cool place.
Best Regards,
Steven #10906726

I recently opened my e-mail and found an announcement from Better Photo that the month of November award winners were basking in the glory of finding their name beside their beautiful entry. CONGRATULATIONS!
#10946338

Copyright for this gallery photo belongs solely to Steven W. Lepak.
Images may not be copied, downloaded, or used in any way without the expressed, written permission of the photographer.
Log in to follow or message this photographer or report this photo.